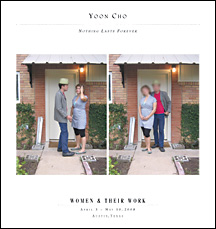 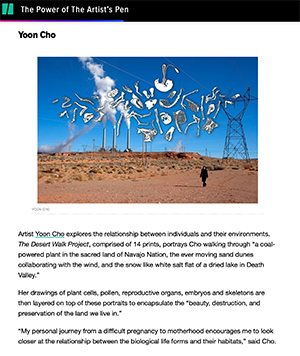 Mina Lee, “The Power of The Artist’s Pen” on The Huffington Post by Nexus Media News.

* Jorge Martin, “Art + Sparks at BETA,” Hyperallergic, November 17, 2010
“Artists like Yoon Cho … created elegant works that may have not been easy to read but they drew me in and encouraged me to decode them even in the midst of this laid back and casual festival.” 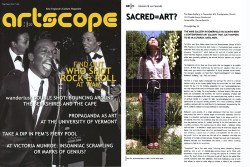 * Mark Drummond Davis, “SACRED=ART?,” Artscope Magazine, May/June, 2010
“”The highlight of the show are those works that run tangent to its explicit themes… The Strongest examples are Yoon Cho’s “Hysterosalpingogram”… The first is a large digital photograph that portrays the artist in a natural outdoor setting as she stands rigidly facing the camera with her neck craned toward the sky. Cho has digitally composited her own hysterosalpingogram, an x-ray image of the uterus and fallopian tubes, onto its anatomically correct position over her body. The x-ray broaches a dialogue between the ways we know our environment and ourselves, the external geography of place and the internal geography of the body. Her upward gaze may signify a moment of spiritual insight or a prayer for help: hysterosalpingogram are usually administered to diagnose fertility problems. The artist’s potentially infertile condition contrasts with the lush flora in the background. Surrounded by life, she is unable to produce it and must confront her own mortality.”

* Judy Birke, “‘Family,’ in fine, revealing variations comes alive at Parachute Factory Gallery,” New Haven Register, February 8, 2009
“A wonderful series of photos by Yoon Cho, from her “Nuclear Family Project,” focuses on images of what an ideal family might look like. In each picture bright yellow silhouettes of an imaginary baby, its potential belongings and activities, are superimposed within color narratives of mom and dad working together within the artists’s “pre-baby” suburban life, the aim to build a new unified identity. Although the imagery reflects the external, well-grounded in formal elements of stability, it clearly invites one into the artist’s internal world, penetrating issues of a particular state of mind.”

*Allan Appel, “‘Family Business’ On Display,” New Haven Independent, January 6, 2008
“Yoon Cho was tired of her relatives asking when she and her husband were going to have a baby. So she started sending out letters with these yellow images – yellow because it’s gender neutral of a future baby, carriage, and suburban life. That became her series of photos in the exhibition called Nuclear Family Project.” 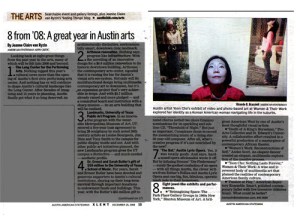 * “Exhibit portrays families,” Yale Daily News, December 2, 2008
“Similarly, Yoon Cho’s series “Nuclear Family Project” seeks to look at family life as a blissful and hopeful experience. Her works are large photographs of a couple in different rooms in a house that is being furbished. Yellow silhouettes of a child are pasted in to create both the idea of an absence and a future presence. Somehow Cho’s work is more haunting than Saccio’s and seems to question whether the nuclear family it is depicting will actually become a reality.”

* D. Dominick Lombardi, “Indianapolis FYI RADAR,” NY ARTS magazine, May, 2008
“In her nuclear family series, Yoon Cho projects the American dream of a backyard oasis surrounding it with kids and toys through yellow silhouettes over color photographs and videos. For Cho, you never get the idea that any of this will come to fruition, yet, by doing the silhouette overlays, viewers might get the feeling that all of it is merely a distraction, or an interruption, to a calm, peaceful, and fulfilling creative existence.” 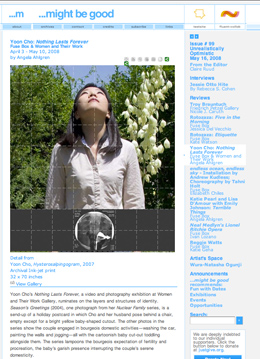 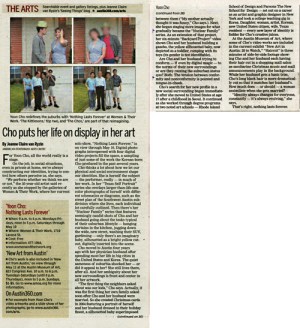 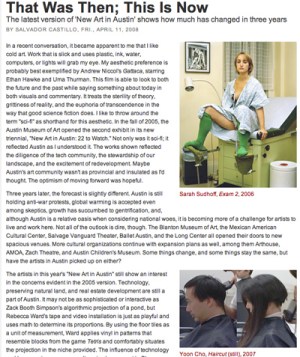 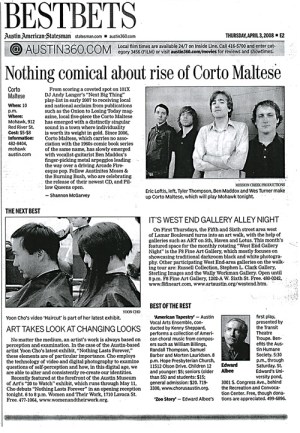 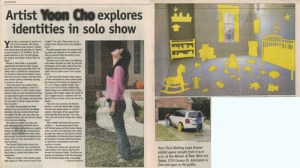 * Emily Macrander, “’20 to Watch’ brings surprise to AMOA,” Daily Texan, April 3, 2008
“Several if the other pieces are lighter in thematic content but still very notable. … Yoon Cho’s use of digital imging in “Hair” in which she assimilates to her new husband by simply taking on his haircut.” 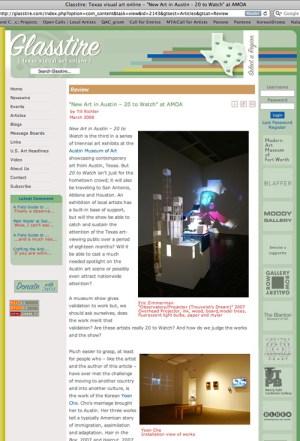 * Shannon McGarvey, “Catch 20 rising stars in Austin arts,” The Austin American-Statesman, February 22, 2008
“Yoon Cho, another artist at the forefront of the exhibition, also delves into issues of identity but chooses instead to employ photography and videography techniques in her method of reflection.” 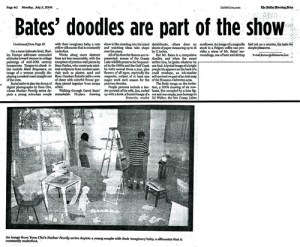