The blurring faces of snapshots put an identity to an end. Digitally manipulated photographs.

Blurring photo series are diptych photographs of people standing in front of their homes. The first pictures are discreetly taken just before people are ready to pose for the picture without giving them advanced warnings for the shot. The subsequent pictures show the models posing for the “one, two, three, cheese!” moment with full awareness of the camera. As they are ready for the camera, they present and hold the best possible poses and facial expressions that they want to record on the picture.

Blurring series explores the process of creating a new persona as we pose for the camera. These blurring faces denote constantly changing undefined fluid state of our identity regardless of the age, gender, race or sexual orientation. The blurring faces put the permanent identities to an end. 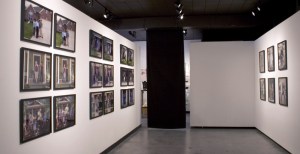 Women and Their Work Gallery in Austin, Texas 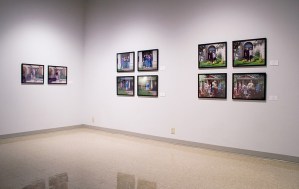 Life is like a play in a big theatre and each of us plays different roles or persona. The blurring faces become a transformational state or process of creating a new persona by playing a certain role. One’s persona is constantly changing and it does not have any solid shape or form – just as our consciousness has no shape or form. In “Blurring” series, the blurring faces are derived from the formless and constantly changing property of our ego creating a new identity. Blurring is the moment when a new identity is formed and at the same time the old identity is lost. The blurring faces put the definitive permanent solid form of identity to an end.

The carrot cutting performance exemplifies a woman’s stereotypical role in the kitchen. As she gets more consumed in her role playing, her face becomes blurry reflecting her persona in transition. Her perpetual work in the kitchen never ends like Sisyphus, the king in Greek mythology who must roll a boulder up a hill only to watch it roll back down forcing him to push the rock back up again and again.

A scene from the Blurring Performers